Hello! Today I’m sharing a sweet and simple Anniversary card that I made for my husband. Now, some of you might think why simple, it should be extravagant if it’s your your husband. But the answer is simple, you have to know the person you are making cards for. When I receive a card, store bought or handmade, I read it, I love it, I place it on the mantle and I see it for a month or so. Children don’t cherish cards, they are concerned about gifts, but the parents sometimes do. And I’ve found that men usually don’t, and that’s ok.  So I will not spend 5-6 hours making a crazy complicated card for my husband, who will quickly glance at it, say “Thanks babe”, put it back into the envelope, and toss it in a pile to be forever lost in his stuff. 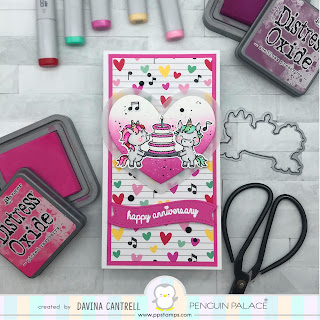 This cute little slimline card is made using stamps from Penguin Palace Stamps, a versatile stamp set called An Amazing Friend and the coordinating die. Originally, this stamp set is intended for a Birthday with the cute unicorns and cake. But I wanted them to be celebrating my anniversary so I chose a sentiment from another set called Hedgehogs in Love, and heat embossed it onto a die cut banner. 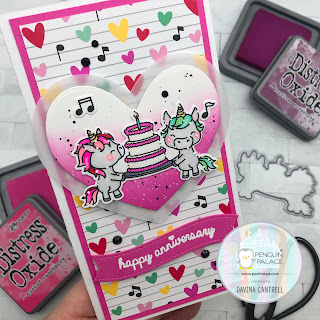 I wanted a shorter slimline card so I created a card base that is sized at 6.5 x 3.5 and I cut two layers to fit on the front. A smaller one from colorful heart patterned paper, and a smaller one from bright pink cardstock that matches the patterned paper. I also cut two heart shaped dies to pop up on top from vellum and bright white Neenah Solar cardstock. I combined two colors of Distress Oxide Ink to create a color that matches the pink cardstock. I do so much inkblending I’ve gotten pretty good at combining them to look seemless. I used Picked Raspberry and Seedless Preserves. Then I splattered with water, then both black and white ink. While that dries fully, I stamped the unicorns, and a pair of music notes from Fun Night Out onto bright white cardstock. I colored them with Copic markers using colors from the paper design, then cut out using the coordinating dies. Next I highlighted with white paint and an embossing stylus. I cut a banner from the same pink cardstock as the larger mat layer, and heat embossed the sentiment onto it. I adhered my images onto the smaller heart, then used foam tape to adhere it to the vellum heart. I attached the whole piece directly to the patterned paper and used some more foam tape for the banner. 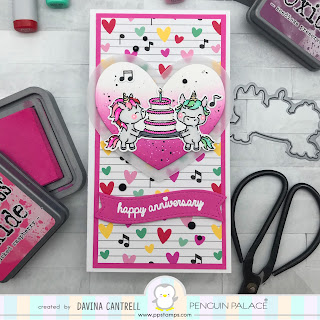 I glued the card onto the base using Scor Tape and finished it off white a sprinkling of shiny black jewels. It’s simple and cute, 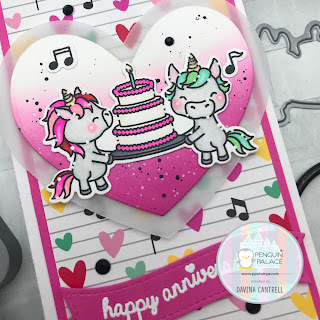 but looks more glamorous than it really is thanks to the great patterned paper and bright layers. Maybe one day I’ll make him a masculine card but this year, he gets hot pink unicorns haha.

Thanks for dropping by,
Davina
Posted by Popsiclesticks at 9:59 AM